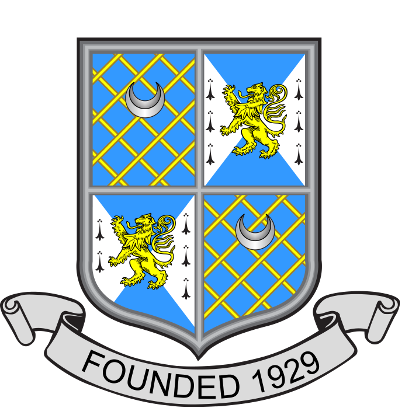 The first official record of golf in Mountbellew dates back to 1906 when a Club was formed and the local landlord, Sir Henry Grattan Bellew, allowed players to use The Deer Park on his demesne for the purpose. Not much is known about their activities before the formal establishment and registration of Mountbellew Golf Club with The Golfing Union of Ireland in 1929. While additional lands were acquired to facilitate our expansion to a full 18-Hole layout in 2008, “The Deer Park” has continued to be the home of golf for more than a century. And permission to adopt their coat of arms as our crest fittingly celebrates Mountbellew Golf Club’s historical links with the Bellew family.

In the beginning, as with many clubs, sheep grazed the fairways and the putting greens were fenced off with wire. For a time, a local farmer was allowed to graze up to six cattle on the Course, provided they did no damage! Long-serving groundsman of those years was Jack Reynolds who cut greens with a hand-mower and trimmed edges with a scythe. The fairways were trimmed with the aid of a horse, which, in 1942, cost seven shillings per day to hire. A limestone quarry in the centre of the Park had been used at one time to supply a lime kiln on the site of the present-day Men’s second Tee. Rough ground on the right of the present second fairway, leading away from the quarry, was affectionately known as “Tiger Country” and one old-timer reputedly lost a bag of clubs when he ventured into the wilderness!

Naturally, the layout of a Course evolves over time. In the early period, the 2nd Hole was a par-3, played from beside the present 1st onto what is now the 8th Green and the 3rd Hole was a par-4 played from “Tiger Country” across The Quarry onto the present 10th Green. Traces of a more recent vintage are the mounds adjacent to the 16th Green which once served as teeing grounds for the 6th/15th Hole. Mountbellew Club developed a challenging 9-Hole links that won admirers and tested their skills. With the river or an Out of Bounds to the right at virtually every Hole, it was imperative to leave your “slice” in the locker-room, while the most feared internal obstacle was “The Quarry” (still claiming the odd wayward shot). 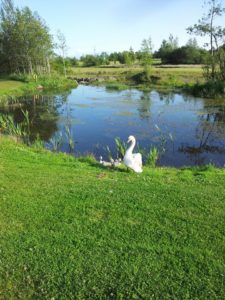 Tributes are due to the personnel who have nurtured and maintained the course, but singular among them was Frank Rushe, a horticulturalist by profession, who also served on Committee and was “Mr Mountbellew Golf” for decades up to the 1980s. His protégé, John Whyte, is today’s Head Groundsman and has steered the Club through the transition to full 18-Hole status. Indeed, Mountbellew would not have lasted through the years without the dedication of many other wonderful individuals. Among present membership are familiar family names that recur in the annals and hark back to the pioneering years – Gilmore, Cheevers, Haverty, Carroll and Cunningham.

The spirit that is the hallmark of Mountbellew was also established in “the good old days” – golf is very much a game to be enjoyed. Typical adherents of this philosophy were the happy band who travelled to Open Days in a hearse – it was during the Wold War II “Emergency” years (1939-45) and petrol supplies were rationed, but allowances were made for certain vehicles, including the Mountbellew golfers’ hearse! In 1946, the annual fees stood at £3 for family, £2-1-0 single man and £1 single lady. Up to the 1950s, membership hovered around fifty and the few ladies who played were allowed to compete in the men’s competitions. On the other side of equality, the ladies were expected to perform catering duties, even into the 1980s!

As the country recovered from post-War depression, golf became ever more popular and there was increasing need to upgrade facilities. The annual Golf Dance in St Mary’s Hall was an important revenue source and a highlight of the town social calendar. It later evolved into the “Dress Dance” at a venue such as Hayden’s Hotel in Ballinasloe. A unique fund-raising event was the Pro-Am of 1972 and 1973 which brought the top Irish professional golfers to Mountbellew – Christy O’Connor (Senior and Junior), Paddy Skerritt, Joe Craddock, Tommy Halpin (’72 winner) and Paddy McGuirk (’73 winner) were among those competing for the Willie Nolan Trophy. Main organiser of the event was Mountbellew Club’s own amateur international, Terence Hegarty. A long-awaited new Clubhouse was opened in June 1973, replacing the green galvanised shed that had served a generation.

Into the last quarter of the 20th century, the pace of change accelerated. An important milestone was the adoption of a new Constitution in December 1990 whereby Mountbellew became one of the first Clubs in Connacht to grant the equal status of Full Membership to ladies. With a view to extending the Course, a stretch of clear-felled plantation was purchased from Coillte Teo in the 1980s. “Kelly’s field”, adjacent to the old fifth fairway, was also acquired and used to extend the Course to 12 Holes.

Eventually, a dynamic Management Committee embarked on the project that saw the opening of a fully-integrated 18-hole Course in August 2008. Designer Ken Kearney merged “The Deer Park” seamlessly into the additional ground, creating a picturesque and fascinating golfing experience. Now, the river adds to a risk-and-reward challenge on two new par-5s while an artificial lake makes the par-3 fifth a tantalising delight. Avenues through the long-established copses give the impression of a Course that is much more mature than its years. As has ever been the case, the Greens at Mountbellew are its greatest defence, so an obedient putter is the most essential weapon in a player’s armoury. And, whether you are “in the groove” or not, the call of the cuckoo, the splashing of trout and the majesty of swans are but some of nature’s glories to be enjoyed on your way around…

On the competitive front, the Men’s Club has enjoyed a share of success at provincial level: Connacht Shield wins in 1995 and 1954, both against Swinford in the final; Cecil Ewing Trophy in 1990; County Trophy on many occasions – dating back to the first inter-Club success in 1940. Former Galway footballer, Johnny Hughes, and Sean McCormack were All-Ireland Holmpatrick Cup champions in [1994]. We qualified to play in the Carroll’s Pro-Am at the Irish Open on two occasions – first with Nick Faldo and in 1989 with Ronan Rafferty at Portmarnock.

Though fewer in number, the Ladies Club has enjoyed remarkable success: our teams have won All-Ireland (and Connacht) titles in Ladies Fourball 2007, Junior Girls Inter-Club Challenge 2007, Junior Foursomes in 2010, Minor Cup 2012 and Australian Spoons 2011. There are provincial titles in Connacht Shield 1991, Lina Black Trophy 1999 and 2005, Intermediate Team 2002, Burren Trophy 2005, Intermediate Cup 2006, Junior Smurfit Singles 2000 and Schools Championship 2006. Emma Gilmore has proven to be our most outstanding player: in 2004, she was selected to represent Ireland at under-18 international level, having earlier helped Connacht Girls to the inter-provincial title.

There is no shortage of competitive golf – with weekly events for both ladies and gents the whole year round, as well as Open days, GUI and ILGU inter-Club fixtures, or the monthly re-entry. But we still place emphasis on the lighter side and recent years have seen the emergence of Captains’ and President’s Drive-in, Marty and Dominica’s Fun Quiz, the Wednesday Seniors and the “Scramble”! Mountbellew is a Club renowned for its friendly atmosphere, a welcome for all and a Course to test your skill whatever your level of expertise.